I now understand why everyone, and I literally mean everyone, mentions food as one of the top 10 tourist attractions to see and do in Malaysia! The Lonely Planet guide ranks Malaysia’s food culture as 9th in its list of things to do and see. To quote The Lonely Planet website:

“The atmosphere is electric and the many types of food available will leave the first-time visitor in a daze!”

This enthusiastically caught my attention but dare I say it, 9th is pathetically low – it should be ranked much higher.  There is plenty of touristy stuff to do but apart from the eclectic mix of cultures, it was the food that really stood out for me.  From the street food in Jalan Alor to the exquisite cakes at the KL Tower, everything was delicious (except the evil durian fruit that should not be considered a food!)

When I originally thought about Malaysian food, I immediately assumed Asian cuisine; veering towards Chinese, who wouldn’t? But this was an ignorant assumption! Malaysian cuisine is spicier and hotter than I thought it was going to be. I was also unaware of the strong Muslim influence in everything Malaysian. As our taxi driver jovially told us,

Culinarily though, this meant that the vast spread of cultures and subsequently dietary requirements has impacted on the variety of foods at stalls and restaurants throughout KL (I’ll tell you about the Arabic restaurant I went into on another occasion).  There was always a vast selection of foods to choose from: Malaysian, Chinese, Thai, Vietnamese, Japanese, Indian, Australian, Italian, Mediterranean, Iranian, Moroccan, etc.  Sadly there  was also a KFC and the omnipresent McDonalds. 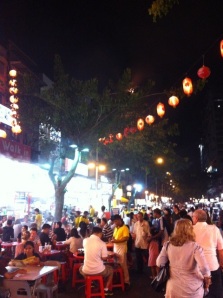 We asked the concierge at our hotel, The Royale Bintang, where they could recommend for us to go for dinner.  They were very quick to mention several western style restaurants but on exclaiming the words, “We want to eat local.”  They chorused, “Jalan Alor!”
On a parallel street to us was the infamous Jalan Alor. A cacophony of scent and sound, where plastic furniture is laid out in a continuous line on either side of a busy street.  Pedestrian and vehicle weave their way through a throng of diners out for delicious food at ridiculous prices!

As total first-timers in KL and more specifically, Jalan Alor, we decided to play it safe and opted for a Chinese-Malaysian eatery.

Everything was delicious!  The soy marinated peanuts were slightly slimy at first but once the initial hesitation subsides they were actually very moreish.  I’ve tried to recreate these at home; unsuccessfully.

However, the pièce de résistance was the relatively modern malaysian dish: buttered prawns.  This dish combines Malay, Chinese, Indian and western ingredients.  A knockout dish which revealed layer upon layer of complex flavours–buttery, salty, sweet, spicy, and garlicky working off one another seamlessly and perfectly.  It was packed with such amazing flavour that you were not even bothered about peeling the prawns at times so that you could suck the tantalising coating covering them!!

Sadly, as simple as recipes suggest their re-creation ability is, the quality of the ingredients we can buy here is not the same.  Oh well, another trip to Malaysia is going to have to be a must to satisfy my buttered prawns cravings.